GAAP vs. tax-basis: Which is right for your business? 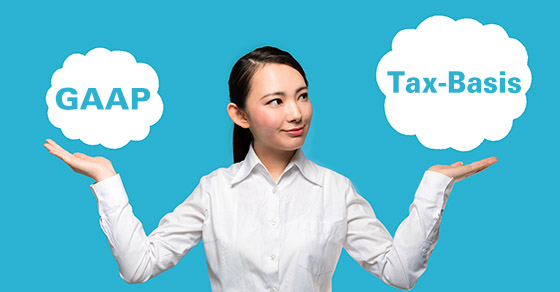 Most businesses report financial performance using U.S. Generally Accepted Accounting Principles (GAAP). But the income-tax-basis format can save time and money for some private companies. Here’s information to help you choose the financial reporting framework that will work for your situation.

GAAP is the most common financial reporting standard in the United States. The Securities and Exchange Commission (SEC) requires public companies to follow it — they don’t have a choice. Many lenders expect large private borrowers to follow suit, because GAAP is familiar and consistent.

However, compliance with GAAP can be time-consuming and costly, depending on the level of assurance provided in the financial statements. So, some private companies opt to report financial statements using an “other comprehensive basis of accounting” (OCBOA) method. The most common OCBOA method is the tax-basis format.

Departing from GAAP can result in significant differences in financial results. Why? GAAP is based on the principle of conservatism, which prevents companies from overstating profits and asset values. This runs contrary to what the IRS expects from for-profit businesses. Tax laws generally tend to favor accelerated gross income recognition and won’t allow taxpayers to deduct expenses until the amounts are known and other deductibility requirements have been met. So, reported profits tend to be higher under tax-basis methods than under GAAP.

There are also differences in terminology. Under GAAP, companies report revenues, expenses and net income. Conversely, tax-basis entities report gross income, deductions and taxable income. Their nontaxable items typically appear as separate line items or are disclosed in a footnote.

Capitalization and depreciation of fixed assets is another noteworthy difference. Under GAAP, the cost of a fixed asset (less its salvage value) is capitalized and systematically depreciated over its useful life. For tax purposes, fixed assets are depreciated under the Modified Accelerated Cost Recovery System (MACRS), which generally results in shorter lives than under GAAP. Salvage value isn’t subtracted for tax purposes, but Section 179 and bonus depreciation are subtracted before computing MACRS deductions.

GAAP has become increasingly complex in recent years. So some companies would prefer tax-basis reporting, if it’s appropriate for financial statement users.

For example, tax-basis financials might work for a business that’s owned, operated and financed by individuals closely involved in day-to-day operations who understand its financial position. But GAAP statements typically work better if the company has unsecured debt or numerous shareholders who own minority interests. Likewise, prospective buyers may prefer to perform due diligence on GAAP financial statements — or they may be public companies that are required to follow GAAP.

Tax-basis reporting makes sense for certain types of businesses. But for other businesses, tax-basis financial statements may result in missing or even misleading information. We can help you evaluate the pros and cons and choose the appropriate reporting framework for your situation.