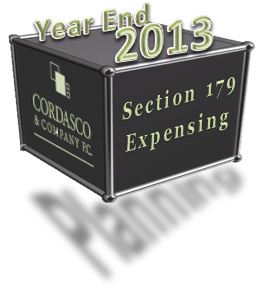 Generous Section 179 expensing limits are set to expire at the end of this year.  If you are  planning to purchase machinery and equipment or invest in eligible real estate assets during the remainder of this year or early next year should try to accelerate their buying plans, if doing so makes sound business sense.

Making the Most of the Current Code Sec. 179 Expensing Limits for 2013

Under Code Sec. 179, a taxpayer, other than an estate, trust, and certain noncorporate lessors, can elect to deduct as an expense, rather than to depreciate, up to a specified amount of the cost of new or used tangible personal property placed in service during the tax year in the taxpayer’s trade or business (as will be explained in Part III of this article, for 2010 through 2013, a limited amount of qualified real property also may be expensed). The maximum annual expensing amount generally is reduced dollar-for-dollar by the amount of Code Sec. 179 property placed in service during the tax year in excess of a specified investment ceiling. The amount eligible to be expensed for a tax year can’t exceed the taxable income derived from the taxpayer’s active conduct of a trade or business. Any amount that is not allowed as a deduction because of the taxable income limitation may be carried forward to succeeding tax years.

Congress isn’t likely to allow the expensing limit and investment ceiling limit to drop this drastically, but it could well legislate a reduction in today’s generous limits.

There is no pro rata reduction of the Code Sec. 179 expensing deduction depending on the portion of the year the asset is held. If the deduction is allowable, the amount that may be expensed is the same regardless of when the property is acquired during the year.

The fact that the expensing deduction may be claimed in full (if the taxpayer is otherwise eligible to take it) regardless of how long the property is held during the year can be a potent tool for year-end tax planning. Thus, property acquired and placed in service in the last days of a tax year, rather than at the beginning of the following year, can result in a full expensing deduction for the earlier year.

Year-end move #1. Where possible, taxpayers should factor the annual expensing limits for 2013 and the possible drop in these limits for 2014 into their annual equipment-purchase plans.

Example 1: During the first eleven months of 2013, Widget, a calendar-year corporation, bought and placed in service $400,000 of expensing-eligible property. It plans to buy an additional $125,000 of expensing-eligible property early next year. If it’s feasible to do so from the business standpoint, Widget should consider accelerating $100,000 of next year’s purchases into 2013 (and place the additional assets in service before year-end). This way, even if the expensing limit drops to $25,000 next year, Widget will be able to fully expense its purchases (total of $500,000 for 2013 and $25,000 for 2014).

The Code Sec. 179 expensing deduction is limited to taxable income from any of the taxpayer’s active trades or businesses. This means that the taxable income limit doesn’t bar an expense deduction just because the particular business in which the property is used doesn’t produce any net income. So long as the taxpayer has aggregate net income from all his trades or businesses, the deduction is allowed.  In general, any amount that cannot be deducted because of the taxable income limit can be carried forward to later years until it is fully deducted.

Year-end move #2. Taxpayers should consider making the expensing election even in a year where a less-than-full tax benefit is derived from the election because of the taxable income limit. This way, the right to carry the expensing deduction forward to other years will be preserved.

Example 2: In December of 2013, Budget Products, a calendar year business, buys and places in service $500,000 of assets that are 5-year MACRS property subject to the half-year depreciation convention. The assets are used and thus not eligible for bonus depreciation. If Budget Products doesn’t elect to expense any part of the $500,000, then under the half-year depreciation convention (and under the 200% declining balance method), it is entitled to a $100,000 depreciation deduction for this property for 2013 ($500,000 × .20 first year allowance). On the other hand, electing to expense the cost of the assets would reduce business taxable income by $500,000. Moreover, even if Budget Products does not have sufficient taxable income to absorb the entire expensing deduction in 2013, the full amount of the excess will be available to offset taxable income in 2014.

Wages, salaries, tips and other compensation earned by employees count for purposes of their Code Sec. 179 taxable income limit.

Year-end move #3. Employees who run a sideline business may be able to reduce their 2013 tax bill by buying business equipment they need before the end of this year rather than in 2014.

Example 3: Jeff is employed as a website designer and earns $70,000 a year. In September of 2013, he starts a photo sideline business but will earn only around $2,000 from it this year. Jeff is planning to buy $5,000 of high-end photo and computer equipment for his sideline business. If he buys and places the equipment in service this year, Jeff can fully offset his $2,000 freelance income and $3,000 of his regular employment income.

As noted above, for 2013, the maximum amount that can be expensed under Code Sec. 179 is reduced dollar-for-dollar for eligible property placed in service during the tax year in excess of $2,000,000.

Caution! Amounts ineligible for expensing due to excess investments in expensing-eligible property can’t be carried forward and expensed in a subsequent year. Rather, they can only be recovered through depreciation.

Year-end move #4. Businesses that are not equipment intensive enterprises should try to avoid buying and placing in service more than the ceiling amount of expensing-eligible property during the year, if it’s possible from the business standpoint to defer additional purchases. In example 4, above, ABX would retain a $500,000 expensing allowance for 2013 if it deferred $300,000 of its purchases until 2014.

In general, property is eligible for Code Sec. 179 expensing if it is:

There’s no requirement that the acquired property be new. Thus, taxpayers may claim expensing for otherwise eligible used property.

Year-end move #5. As a general rule, to maximize the tax benefit to be gained through expensing, a taxpayer should make the expensing election for eligible property with the longest recovery period.

If you have any questions regarding year end tax planning or Section 179 expensing, please do not hesitate to contact us.