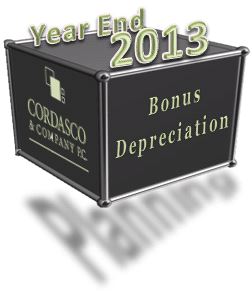 An expanding and strengthening economy may mean that Dec. 31, 2013 will be the end of the line for some stimulus-type tax breaks. Unless Congress acts, additional depreciation deductions in the placed-in-service year equal to 50% of the adjusted basis of qualified property (often referred to as bonus depreciation) generally won’t be available for property placed in service after this year. Also slated for disappearance is the 15-year writeoff and special expensing allowance for qualified leasehold improvement property, retail improvements, and restaurant property. Finally, the overall Code Sec. 179 expensing limit is set to plummet to $25,000 for property placed in service next year. Therefore if you are planning to purchase machinery and equipment or invest in eligible real estate assets during the remainder of this year or early the next should try to accelerate their buying plans, if doing so makes sound business sense.

Note: The bonus depreciation deduction is determined without any proration based on the length of the tax year. As a result, accelerated first-year deductions are available even if qualifying assets are in service for only a few days in 2013.

Caution! Accelerating a purchase into 2013 may not always be a good idea. For example, it may not produce good results for a taxpayer that has an about-to-expire net operating loss. On the other hand, a taxpayer for whom accelerating the purchase will produce a net operating loss for 2013 that can be carried back to 2011, and who had income taxed at the highest rate in that year, has a good reason to make the purchase in 2013.

How to qualify for bonus depreciation.

In general, an asset purchased in 2013 qualifies for the bonus depreciation allowance under Code Sec. 168(k) if:

The 50% additional first-year depreciation allowance applies to qualified property unless the taxpayer “elects out.” The election out may be made for any class of property for any tax year, and if made applies to all property in that class placed in service during that tax year.

For new vehicles bought and placed in service in 2013, and that qualify for bonus first-year depreciation, the boosted first-year dollar limit is $11,160 for autos (not trucks or vans), and $11,360 for light trucks or vans (passenger autos built on a truck chassis, including minivans and sport-utility vehicles (SUVs) built on a truck chassis). The regular first-year luxury auto limits (e.g., for vehicles not eligible for bonus depreciation, or for which the taxpayer elects out of bonus depreciation) are $3,160 for autos and $3,360 for light trucks or vans. However, under current law, these boosted dollar amounts apply only for vehicles bought and placed in service before 2014. As a result, taxpayers thinking of buying a new auto, light truck or van for trade or business use should buy the vehicle and place it in service this year in order to lock in maximum first-year deductions.

Note: Heavy SUVs—those that are built on a truck chassis and are rated at more than 6,000 pounds gross (loaded) vehicle weight—are exempt from the luxury-auto dollar caps because they fall outside of the definition of a passenger auto. Not more than $25,000 of the cost of a heavy SUV may be expensed under Code Sec. 179. The balance of the heavy SUV’s cost may be depreciated under the regular rules that apply to five-year MACRS property (e.g., a 20% first-year depreciation allowance if the half-year convention applies for the placed-in-service year). However, with the 50% first-year bonus depreciation available for qualified assets bought and placed in service in 2013 (in addition to the $25,000 expensing allowance and regular depreciation), taxpayers buying and placing in service new heavy SUVs in 2013 may be entitled to write off most of the cost of the vehicle in the first year.

Effect of half-year and midquarter conventions on year-end planning.

If you have any question regarding the application of bonus depreciation on your individual situation, please do not hesitate to contact us.