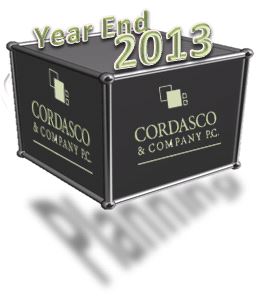 Year-end tax planning could be especially productive this year because timely action could nail down a host of tax breaks that won’t be around next year unless Congress acts to extend them, which, at the present time, looks doubtful.

These include, for individuals: the option to deduct state and local sales and use taxes instead of state and local income taxes; the above-the-line deduction for qualified higher education expenses; and tax-free distributions by those age 70- 1/2 or older from IRAs for charitable purposes. For businesses, tax breaks that are available through the end of this year but won’t be around next year unless Congress acts include: 50% bonus first-year depreciation for most new machinery, equipment and software; an extraordinarily high $500,000 expensing limitation; the research tax credit; and the 15-year writeoff for qualified leasehold improvements, qualified restaurant buildings and improvements and qualified retail improvements.

High-income-earners have other factors to keep in mind when mapping out year-end plans. For the first time, they have to take into account the 3.8% tax surtax on unearned income and the additional 0.9% Medicare (hospital insurance, or HI) tax that applies to individuals receiving wages with respect to employment in excess of $200,000 ($250,000 for married couples filing jointly and $125,000 for married couples filing separately).

The surtax is 3.8% of the lesser of: (1) net investment income (NII), or (2) the excess of modified adjusted gross income (MAGI) over an unindexed threshold amount ($250,000 for joint filers or surviving spouses, $125,000 for a married individual filing a separate return, and $200,000 in any other case). As year-end nears, a taxpayer’s approach to minimizing or eliminating the 3.8% surtax will depend on his estimated MAGI and NII for the year. Some taxpayers should consider ways to minimize (e.g., through deferral) additional NII for the balance of the year, others should try to see if they can reduce MAGI other than unearned income, and others should consider ways to minimize both NII and other types of MAGI.

We have compiled a checklist of additional actions based on current tax rules that may help you save tax dollars if you act before year-end. Not all actions will apply in your particular situation, but you will likely benefit from many of them.

These are just some of the year-end steps that can be taken to save taxes. If you have any questions regarding these planning ideas or would like to meet for us to custom tailor a particular plan that will work best for you, please do not hesitate to contact us.

This entry was posted in Blog, Featured on Homepage, Tax Planning and tagged #taxplanning, Tax Planning. Bookmark the permalink.
Logging In...